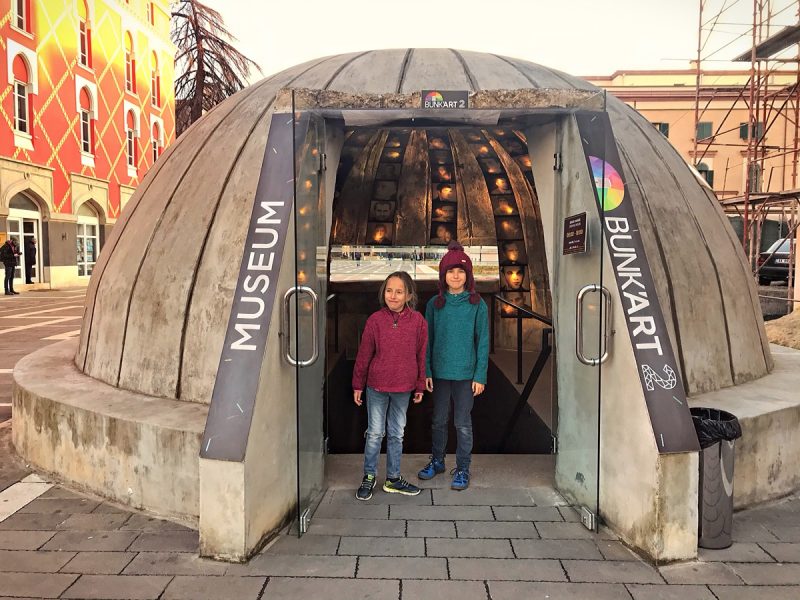 Bunkart 2 is a museum showing the cruelty of the Albanian police state from 1945 to 1991. The museum is located in a nuclear bunker in the centre of Albania’s capital, Tirana.

The 1,000 sq metre Bunker, with walls 2.4 m thick, was built between 1981-86 as a hideout for elite police and the Albanian Ministry of the Interior.

From 1967 until his death in 1985, paranoid dictator Enver Hoxha ordered the construction of something between 178,000 and almost 700 000 bunkers for fear of attacks from the United States or/and the Soviet Union. It was Enver Hoxha who isolated Albania from the rest of the world. If you want to learn more fact about Albania read our other article.

The Museum of 24 rooms describes the history of Albania’s secret police from 1912 to 1991. The first four rooms lead up to the Second World War, and the remainder show the career of the state security Police Sigurimi from 1945-1991 and their ways of control and power in line with the expectation of the dictator.

In these rooms, we learnt the sad story of the 989 killed trying to leave Albania, the 6,027 executed with or without process as enemies of the state, and the 34,000 imprisoned or sent to camps. All this because of the paranoia of one man. All documented and illustrated.

It was an uncomfortable time we spent in the museum, reminiscent of Orwell’s 1984. As we walked the underground corridors we saw photos, and movies and read the stories of people maimed and tortured by their own “brothers” or killed on the border by trained dogs. At times I hurried the girls through some of the rooms, not wanting them to learn too much.  After reading about the tortures, I was physically sick.

The kids did enjoy reading and learning about spying equipment, though it took some explaining why a neighbour would spy on a neighbour.

While the museum was being constructed, the domed entrance was damaged by groups who saw it as a “glorification” of the dictatorship.  The damage left a big hole in the dome. Our take away was the very opposite of glorification, however even the protestor’s damage has been kept to complete the sad history of bad communication and much worse.

I was very upset by this museum, but I’m glad we visited it, as I think it helped me understand Albania and the Albanians, who are the most friendly and helpful people.

The strange thing for me was that it was the most expensive museum we visited in Albania and the only one that charges an entry fee for children. This museum should be free to teach history, so it will never repeat.