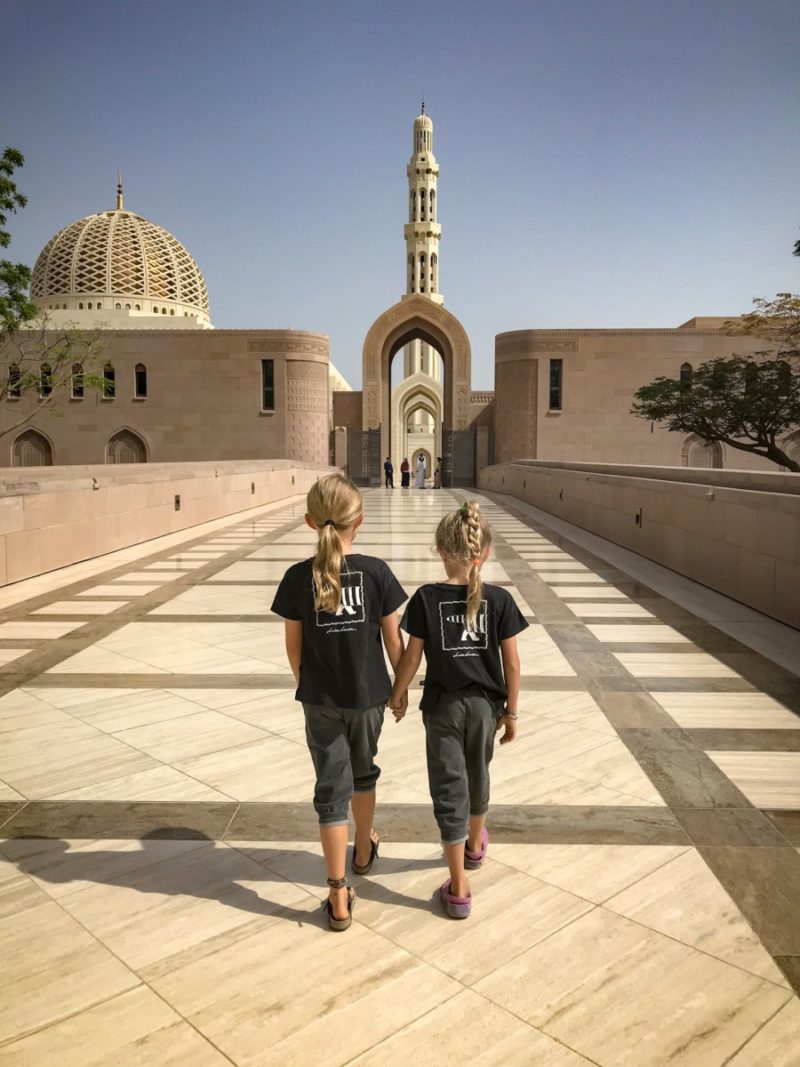 In Europe, you go to churches which are old. They have splendour, history and a soul. In Arabic countries, or at least in Oman, old mosques are small and are nothing to look at – they have one goal. They are places to pray, as they should be in my opinion. New mosques, like Sultan Qaboos Grand Mosque, on the other hand, are big or very big. They are places to admire. I have sometimes wondered whether they build them so huge so that their size will exceed that of the shopping malls which are constantly being built in the Middle East, as a reminder of what is important.

Those enormous new mosques – Sultan Qaboos Grand Mosque in Muscat can fit up to 20,000 worshippers –  are mostly empty during the week and they fill up with worshippers on Fridays. You can see hundreds of Pakistani and Bangladeshi working men walking along the sides of the road on Friday for midday prayer. You see an expensive sports cars, enormous 4×4 with freshly shaven dressed in snow white dishdasha Omani arriving with the same purpose. Rich man, poor man, they all remove their shoes and praised Allah. There, for the moment during the Friday noon prayer, they are equal.

Oman has gained a number of big mosques over the last few years, but still the biggest and most important is Sultan Qaboos Grand Mosque. The site is over 400,000 sqm, and from whatever side you approach, it impresses – either with its architecture or the beautiful gardens.

The main feature of the Sultan Qaboos Grand Mosque is the men’s prayer room which at seventy-four by seventy-four metres which is more than 80% as big as an international football pitch. It could almost fit 15 basketball courts. So now imagine the carpet. It’s in one piece and it was woven by 600 hundred Iranian women over a period of 6 years. It weighs 21 tons. This carpet is the second biggest carpet in the world. The largest carpet is in the Grand Mosque in Abu Dhabi.

Not having the biggest carpet in the world is not a problem if you do have the biggest chandelier in the world. It’s fourteen metres tall and has a staircase inside for maintenance access to the eleven hundred light bulbs. The Chandelier is decorated with 600,000 Swarovski crystals and weighs over eight and a half tons. However enormous it is, it doesn’t feel oversized as it hangs in a vast 50 metre-high dome.

For sightseeing, the Sultan Qaboos Grand Mosque is open from 8 am till 11 am every day except Friday. You should dress modestly. For ladies, this means with covered legs and arms, and covered hair. Men should have long trousers.

If you are a single female travelling through Oman and you want to learn more about customs click here.

Inside the Mosque there is a place which gives information about Islam, and where you can have a drink of water, and dates. It’s very friendly and makes for a good escape from the heat.

We had the following conversation:

That’s how we kind of finished that conversation and started another one on a different subject.