We spent two months exploring Morocco and its beautiful sites. We try to learn as much as we could about this fascinating country which resulted in this article Morocco Facts.

Morocco – The Nation, its Language and Symbols

Morocco’s flag since 1912 has a green pentacle known as Solomon’s Seal in the centre of a red field. The pentacle signifies the five pillars of Islam. It represents a nation in the service of God. Red and green are common colours for Arab flags – the red of the Moroccan flag is traditionally dyed with the leaves of the native canna plant, a relative of the daisy.

Morocco has two official languages: Arabic and Amazigh (Berber). French is the almost universal second language and is used for many place names and signs.

Adult literacy increased from 30.3 % in 1982 to 71.7 % in 2015 (latest available figure) growing at an average annual rate of 16.14 %. (https://knoema.com/) School is mandatory for children from 7 to 15 but attendance is impractical for some children in rural areas and is not generally enforced. 91% of boys and 88% of girls attend primary school, for secondary school the figures are 38% boys and 36% girls (source Unicef latest available figures 2008-2012 https://www.unicef.org/infobycountry/morocco_statistics.html)

A Brief History of Morocco

History first mentions the land that is now Morocco in about 1,000 BC when the Phoenicians arrived from the eastern Mediterranean for trade.  In 146 AD after the Romans had captured the Phoenician capital of Carthage, Morocco became part of the Roman Empire until the fifth century.

In 705 after twenty years of Arab raids, Morocco came under Islamic control and Arabic Morocco went on to conquer southern Spain.  The region sub-divided into smaller kingdoms, one of which was ruled by Idriss the first.  Idriss and his son Idriss II formed an alliance with the Berbers in the North around Fes in 789, and he is now known as the founder of Morocco. 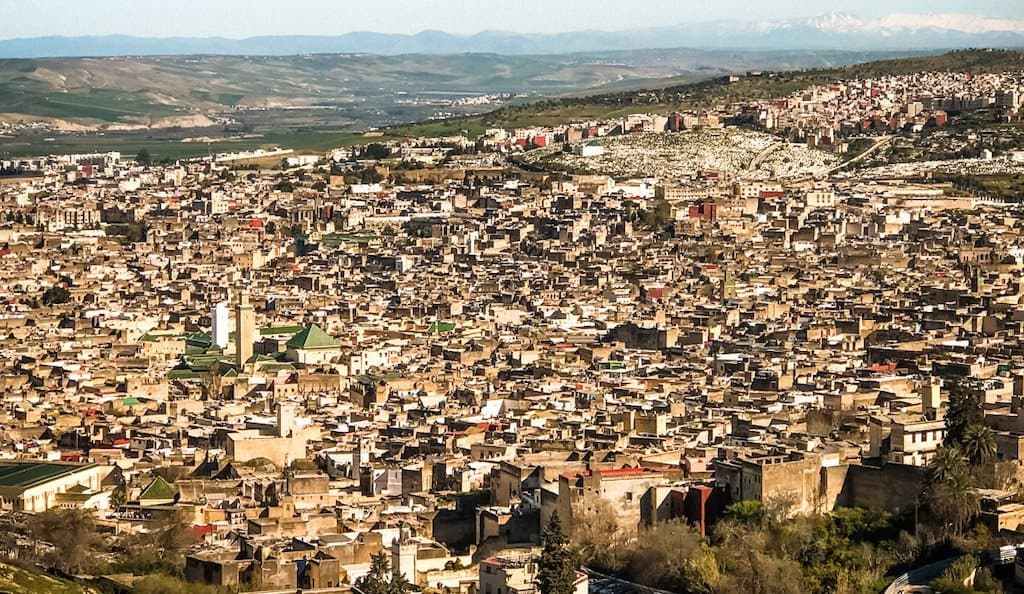 From the eleventh to the beginning of the 20th century Morocco was a strong country trading from the Sahara and Sub Saharan Africa with the world and was ruled by a succession of Berber or Arab dynasties.

In 1912 Morocco become a French protectorate.  The French declared Rabat as the capital city of Morocco 1913 because Morocco had no fixed capital at the time.

Morocco gained independence from France in 1956, when Sultan Mohammed V declared Morocco as a constitutional monarchy and assumed the title of King in 1957. The present king: Mohammed VI is the great-grandson on Mohammed  V and was crowned in 1999, continuing the Alaouite Dynasty which came to power in 1666.

Today, Morocco is a fast developing country. The main industries are tourism and textiles.  Its population is 34 million.

After the death of King Hassan II in 1999 Morocco is ruled by his son Mohammed VI, who introduced social and economic changes after his father’s strict rule and poor human rights. King Mohammed VI is the chief of the military

Saad-Eddine El Othmani is the current prime minister of Morocco. Prime Minister is chosen by the King from the largest and strongest party in the parliament.

Facts about Food and Drink in Morocco

Morocco’s national drink is Tea. This tradition dates back to the 19th century, when British merchants were blockaded from Landing, and had to offload their cargoes.

Mint tea – Green tea brewed with a handful of fresh mint leaves is the most popular drink in the country.  It is drunk without milk and traditionally poured back from the cup to the pot two or three times before the last pour, with the pot held high so the stream splashes into the cup with bubbles. Tea is offered as an act of hospitality and it is impolite to refuse.

Couscous is a common dish, often steamed over a stew of meat and vegetables. It is a sacred meal on Friday and is being prepared in almost every house. Meat may be served covered by a pyramid of couscous with vegetables pressed into the sides and garnished with sweet raisins.
Eating with the left hand is considered ‘unclean’. Rejecting an offer of meat may be insulting as it can be interpreted to suggest that the host cannot afford to offer it.

The characteristic shallow earthenware cooking pot with a conical lid seen in Morocco is the Tagine. The name refers to the pot which is used both for cooking and serving and to the slow-cooked contents.  A Tagine will include meat or fish, potatoes, vegetables and Moroccan spices with lemon and olives. A traditional tagine is both dairy free and gluten free.

Facts about Tourism in Morocco

Tourism is very important for Moroccan economy it accounts for almost for 20% of Moroccan GDP. The strongest industry is located around the coast – Agadir, Imsouane – a paradise for Surfers, Essaouira and around cultural and historical towns which quite often are enlisted on UNESCO World Heritage Sites

Ibn Battuta (1304-1369) the great Explorer and Geographer who travelled as far east as Beijing and through countries as far apart as modern Bulgaria, Malaysia, Kazakhstan, Tanzania and Guinea – was Moroccan, from Tangier.

Al – Idrisi born around 1100 CE was and geographer and a cartographer. His maps were being used by Christopher Columbus and Vasco da Gama. He is as well known for the 400 kg silver sphere globe which he made for King Roger II of Sicily

Jean Reno – famous French actor was born in Casablanca and lived here till age of 17th  to Spanish parents who left Spain to Morocco in search of better life.

During the 1950s and 60s, Morocco attracted foreign writers, William S. Burroughs, Jack Kerouac, Allen Ginsburg, Tennessee Williams and others all worked here.  Paul Bowles lived in Morocco for more than 50 years
Jimi Hendrix visited Essaouira and there are lots of urban legends connected with this visit – for example, that he wanted to buy property, or that he wrote a song there. However, History reveals that he stayed only 3 days in Esssaouira and didn’t even bring his guitar.

Witchcraft in Morocco – At most country markets in Morocco, witches dispense curses and potions. Most towns also have fortune-tellers who can reveal the unknown or foretell the future. Shawafas (witches) are still very often consulted in matters of marriages, love and health issues.

Evil Eye Similar as in Greece Moroccan are believe in evil – eye  (al-ayn). To protect from other people evil eye you can were with you a talisman that resembles hand with eye drown in the middle. Its a very popular souvenir to get from Morocco.

Jinns – Moroccan believe in Jinns (Djinns) – bad spirits which quite often hide in drains, ruins, toilets or desert, because of that we were warned not to visit the toilet after 11 pm.

Facts about Moroccans Dress and Customs

References used in this Collection: